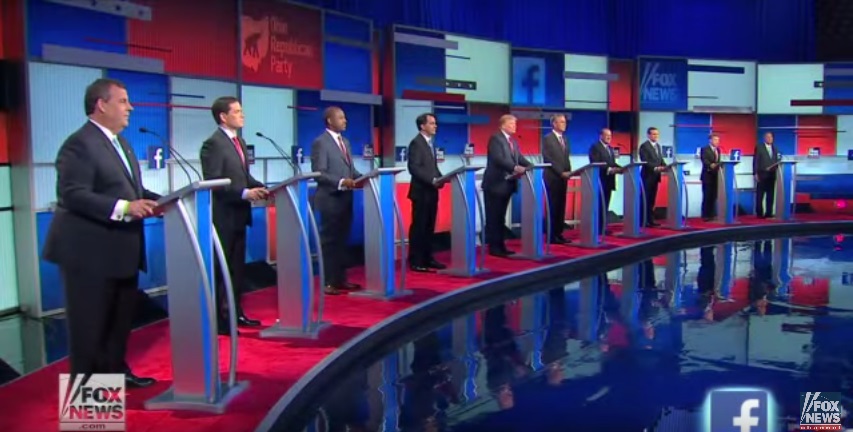 6) Gov. Chris Christie was made to look small on a big stage. Sen. Rand Paul made himself look small in his attacks on Christie and more broadly.

It was not immediately clear to me what Gov. Christie’s strategy was during the debate. In a field consisting of others with executive experience and achievement, the governor did nothing to differentiate himself. Sen. Rand Paul on the other hand in picking fights with Gov. Christie and Donald Trump to me looked like he was grasping at straws, with a debate plan based more on tactics than strategy.

Of course, there is a place in presidential campaigns for protest candidates, but Sen. Paul has greater aspirations. I am not sure that being combative will play well for him, and it certainly will not for Christie either until and unless it is perceived to be combative on behalf of the American people.

Either way, both of these candidates are in trouble.

7) The debate did not really get into big questions on foreign policy.

A few questions that every candidate should have to answer: (i) How will your foreign policy differ from that of Presidents Obama and Bush. (ii) Who poses the greatest threat to America today, and why? (iii) How do you intend to handle ascendant Islamic supremacists, Russia and China?

In fact, here are 20 such questions that the field ought to grapple with.

8) Ben Carson made two great points, but he did not appear well-prepared.

Carson threw some serious red meat to conservatives when it came to defining Secretary of State Hillary Clinton’s political philosophy as secular progressive Alinskyism. He was dead on. His response on colorblindness when it comes to race was similarly powerful. That said, Carson felt unprepared and scripted at the same time during several of his responses. To my mind he is a very intelligent, likable and decent man, but I am not sure he has the experience nor capability to seriously compete in a political battle for the highest office in the world.

9) Gov. Jeb Bush was sort of an afterthought, and frequently stumbled through his responses.

As noted in the postgame show, Gov. Jeb Bush was overshadowed by all of the other sideshows, Trump and beyond last night. One would think that he would have tried to elevate himself above the fray as the serious executive who understands the issues and can tout a supposedly conservative record from Florida. Did he achieve this last night?

Separately, leaving aside my own admitted disagreement with Gov. Bush on Common Core and immigration, I thought that he frequently stumbled through his responses, especially when summing up his arguments. This surprised me.

Lastly, “Veto Corelone” line aside, Jeb did not come off as being as likable and charismatic as George W. Bush, perhaps his most serious political Achilles heal.

10) The debate did not reveal who the stalking horses are.

For a good example, check out this article about Gov. Christie potentially serving as Gov. Bush’s wrecking ball in exchange for an AG nomination. However improbable that scenario might be, we should all employ this type of logic when evaluating the field.

How they will fight each other and make use of the likes of Carly Fiorina, Donald Trump, Governors Bobby Jindal, John Kasich, Rick Perry and others will be fascinating.

But it is unclear at this juncture as to how exactly things will unfold.

BONUS: Carly Fiorina was championed by Megyn Kelly as well as Republicans on social media. People have not examined her positions closely.

Carly Fiorina is an articulate and crisp speaker, and having risen to CEO at HP, likely a shrewd politician as well, which is not to be ignored. That said, one gets the sense that the hullabaloo around her yesterday was generated in large part due to (i) the relatively weak performances of many others during the early debate and (ii) the ignorance of Carly Fiorina’s record. On number two, Fiorina is no conservative. She is also politically vulnerable, though no one has laid a hand on her in the Republican field because she is not yet perceived as a serious threat. She is going to be tested on all of these fronts going forward.