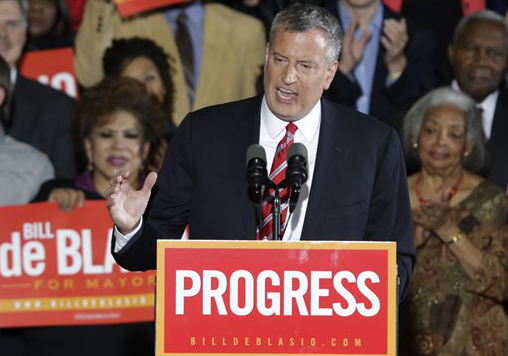 Progressivism: Progress for the politically connected and woe for everyone else.

In addition to creating a $150,000 post for Stephanie Yazgi — the longtime girlfriend of his top strategist, Emma Wolfe — de Blasio has created positions to amp up his progressive agenda and national profile and spread propaganda touting his “transcendent” accomplishments.

The city’s television station — led by de Blasio buddy Janet Choi — devotes much of its taxpayer-funded $5.7 million budget to broadcasting his ribbon-cuttings, announcements and features about his friends, including his wedding singer.

His $105,000 digital director, Jessica Singleton, shapes his social-media image while his $69,000 media analyst, Mahen Gunaratna, measures the influence of his messages.

“The CAU has now turned into a four-year organizing arm of the de Blasio campaign,” said a former liaison with the unit.

The unit now employs Pinny Ringel, a $65,000-a-year liaison to the Jewish community and a former Public Advocate’s Office staffer under de Blasio.

Sarah Sayeed is a liaison who specializes in the Muslim community. And Jonathan Soto is senior community liaison to the Clergy Advisory Council, another de Blasio creation.

And Rebecca Lynch, a Teamsters union lobbyist who backed de Blasio’s campaign, landed a gig as an $85,000-a-year special assistant in the CAU before taking a leave of absence to launch a bid for City Council in Queens.

But that’s not all:

Promoting his national agenda, de Blasio formed an Office of Sustainability whose director, Nilda Mesa, hauls in $179,870 per year.

She is supposed to advance “sustainability initiatives and green investments” and reduce the city’s greenhouse-gas emissions, according to a mayoral release.

And he is still looking for an organizer for the urban agenda he’s touting to other mayors, including raising the minimum wage and reducing “income inequality.”

To ensure the smooth rollout of his pre-K initiative — the cornerstone of his campaign — de Blasio beefed up the Department of Education’s early-education office with allies like Joshua Wallack.

A former aide from de Blasio’s City Council days, Wallack started at $185,000 and is now a deputy chancellor.

Avi Fink, another liaison to the Jewish community, boosted his pay from $70,000 to $93,600 when he switched jobs from deputy chief of staff to deputy director of intergovernmental affairs.

Ellyn Canfield, deputy director to the Mayor’s Office of Special Projects, doubled her pay to $80,000 a year when she left the Public Advocate’s Office as de Blasio’s scheduler and joined City Hall.

And Edith Sharp, a mayoral assistant, doubled her salary to $100,000 after serving as an assistant to the public advocate.

Izabella Vais, a $120,000-a-year assistant commissioner at the Taxi and Limousine Commission, had a knack for extracting cash from the taxi industry as a key campaign fund-raiser.

Good work if you can get it, but bad news for the citizens of New York.

Of course if you think his patronage is bad, you should see his policies.