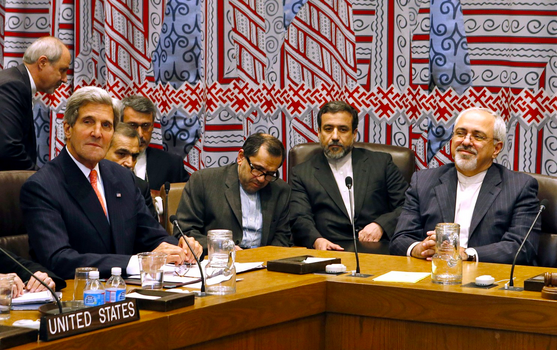 Kerry: Let me put this in very precise terms. Look, I’ve gone through this backwards and forwards a hundred times and I’m telling you, this deal is as pro-Israel, as pro-Israel’s security, as it gets. And I believe that just saying no to this is, in fact, reckless.

Kerry: Because there’s a huge level of fear and mistrust and, frankly, there’s an inherent sense that, given Iran’s gains and avoidance in the past, that somehow they’re going to avoid something again. It’s a visceral feeling, it’s very emotional and visceral and I’m very in tune with that and very sensitive to that. – John Kerry’s Interview With Jeffrey Goldberg for The Atlantic

So just to be clear, Secretary of State Kerry and the Obama administration have cut a deal in which Iran will be subjected to no inspections, no disclosures, no verification and no sanctions, that will equip the world’s leading state sponsor of terror with billions of dollars, and requires that the U.S. help protect its nuclear infrastructure, among many other travesties, but Secretary of State Kerry believes that critical Israelis in particular and Jews in general are responding “emotionally,” as opposed to rationally with fear and loathing?

Contrast the reaction of Jews, Christians and others who comprise the majority of Americans who oppose the Iran Deal with the Obama administration that claims that its political opponents are siding with Iran’s “hardliners” — that is, the mullahs to whom President Obama has not only capitulated but in effect made common cause.

In a parade of horribles chronicled in a powerful editorial in the Jewish magazine Tablet (no enemy of President Obama mind you), the publication’s Editors write:

What we increasingly can’t stomach—and feel obliged to speak out about right now—is the use of Jew-baiting and other blatant and retrograde forms of racial and ethnic prejudice as tools to sell a political deal, or to smear those who oppose it. Accusing Senator Schumer of loyalty to a foreign government is bigotry, pure and simple. Accusing Senators and Congressmen whose misgivings about the Iran deal are shared by a majority of the U.S. electorate of being agents of a foreign power, or of selling their votes to shadowy lobbyists, or of acting contrary to the best interests of the United States, is the kind of naked appeal to bigotry and prejudice that would be familiar in the politics of the pre-Civil Rights Era South.

This use of anti-Jewish incitement as a political tool is a sickening new development in American political discourse, and we have heard too much of it lately—some coming, ominously, from our own White House and its representatives. Let’s not mince words: Murmuring about “money” and “lobbying” and “foreign interests” who seek to drag America into war is a direct attempt to play the dual-loyalty card. It’s the kind of dark, nasty stuff we might expect to hear at a white power rally, not from the President of the United States—and it’s gotten so blatant that even many of us who are generally sympathetic to the administration, and even this deal, have been shaken by it.

So tell us Secretary of State Kerry, who is it that is reacting emotionally: Those who in defense of a policy must engage in Jew-baiting, invoke the odious dual-loyalty canard and propagate thinly-veiled anti-Semitism, or those who oppose it on grounds of protecting and preserving the Judeo-Christian West against the genocidal jihadists hellbent on destroying it?

UPDATE: A related must-read from James Taranto in the Wall Street Journal.