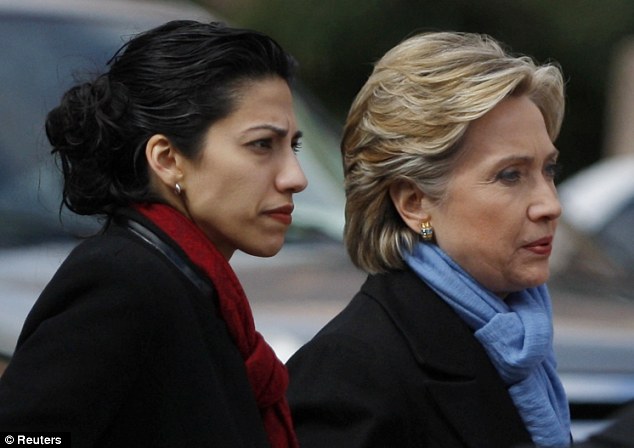 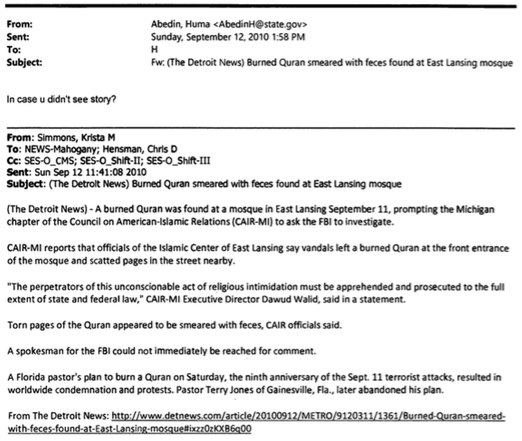 During her time as secretary of State, Clinton championed the Organization of Islamic Conference-backed United Nations Human Rights Commission Resolution 16/18, which calls for “combating intolerance, negative stereotyping and stigmatization of, and discrimination, incitement to violence, and violence against persons based on religion or belief.”

Retired Maj. Stephen Coughlin, the Pentagon’s leading adviser on Islamic law as it relates to national security, makes a compelling case in his book “Catastrophic Failure” that the resolution is actually a Shariah-based Trojan Horse meant to stifle all criticism of Islam.

Coughlin writes that the Islamic Conference, through the resolution, seeks to criminalize incitement to violence by imposing a “legal standard designed to facilitate the “shut up before I hit you again” standard associated with the battered wife syndrome.”

He convincingly argues that the Islamic Conference desires that

… [T]he United Nations, the European Union, the United States and all other non-Muslim countries pass laws criminalizing Islamophobia. This is a direct extraterritorial demand that non-Muslim jurisdictions submit to Islamic law and implement shariah-based punishment over time. In other words, the OIC is set on making it an enforceable crime for non-Muslim people anywhere in the world—including the United States—to say anything about Islam that Islam does not permit.

In the wake of the Sept. 11, 2012 attack in Benghazi, then-Secretary of State Clinton and President Barack Obama felt compelled to film an address for the Muslim world. In the video, Clinton and Obama disavowed any link between the U.S. government and the “Innocence of Muslims” movie that critically depicted Muhammad, which the Obama administration infamously argued prompted the jihadist attack.

That address we may chalk up to political correctness.

But a related fact we cannot.

In spite of Judicial Watch’s bombshell report indicating that the Obama administration knew about the Benghazi attack 10 days in advance – and knew that it had nothing to do with “Innocence of Muslims” — as revealed in an October 2012 interview with Glenn Beck, Charles Woods, father of slain Navy SEAL Tyrone Woods, told Beck that Clinton had personally vowed to “make sure that the person who made that film [“Innocence of Muslims”] is arrested and prosecuted.”

The “Innocence of Muslims” filmmaker and former bank fraudster Nakoula Basseley Nakoula was later arrested and charged with violating the terms of his probation, spending one year in prison.

Consequently, the U.S. government — as promised by Clinton — in effect enforced Shariah compliance concerning blasphemy consistent with the Islamic Conference-backed resolution, and did so knowing that the film had nothing to do with the Benghazi attack.

Whatever the reason that Huma Abedin felt the need to give a heads-up to Hillary Clinton on this particular story, this and the hundreds if not thousands of emails between them remind us that though the press may ignore it, a Muslim Brotherhood-tied aide has been closer to Mrs. Clinton than perhaps anyone else for many years, including critical ones at Foggy Bottom.

She continues to stand by Mrs. Clinton today.