END_OF_DOCUMENT_TOKEN_TO_BE_REPLACED

John Tamny is one of the most Hazlitt-ian writers of the modern era — a true treasure when it comes to elucidating free market principles, and in particular making the case for sound money simple. As a brief aside, I had the chance to speak with the RealClear Markets editor and Forbes Political Economy editor about his “Popular Economics” here, a conversation I relished.

So it should could as no surprise that Tamny’s review of prolific writer, futurist and Reagan’s most quoted living economist George Gilder’s new monograph, The 21st Century Case for Gold: A New Information Theory of Money, would contain a wealth of insight. 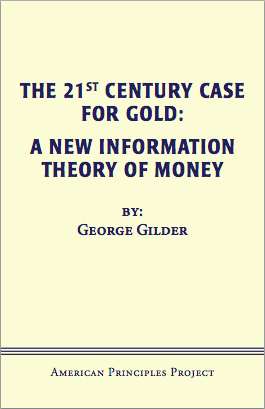 Gilder’s revolutionary application of information theory to economics was presented comprehensively in a 2013 title that deserves more attention than it has received to date, Knowledge and Power. Here’s a handy listicle I published that provides a substantive overview of Gilder’s work.

At its most simple, Gilder argues that information is the key to all economic growth. If it has a clean medium in which to be disseminated — namely an environment in which private property rights are protected, taxes are low and money is sound — we will flourish.

Here is how Gilder puts it:

Entropy is a measure of surprise, disorder, randomness, noise, disequilibrium, and complexity. It is a measure of freedom of choice. Its economic fruits are creativity and profit. Its opposites are predictability, order, low complexity, determinism, equilibrium, and tyranny. Predictability and order are not spontaneous and cannot be left to an invisible hand. It takes a low-entropy carrier (no surprises) to bear high-entropy information (full of surprisal). In capitalism, the predictable carriers are the rule of law, the maintenance of order, the defense of property rights, the reliability and restraint of regulation, the transparency of accounts, the stability of money, the discipline and futurity of family life, and a level of taxation commensurate with a modest and predictable role of government. These low-entropy carriers do not emerge spontaneously. They are the effects of political leadership and sacrifice, prudence and forbearance, wisdom and courage. Sometimes they must be defended by military force. They originated historically in a religious faith in the transcendent order of the universe. They embody a hierarchic principle. It is these low-entropy carriers that enable the high-entropy creations of successful capitalism.

And a bit more:

Economic growth springs not chiefly from incentives—carrots and sticks, rewards and punishments for workers and entrepreneurs. The incentive theory of capitalism allows its critics to depict it as an inhumane scheme of clever manipulation of human needs and hungers scarcely superior to the more benign forms of slavery. Wealth actually springs from the expansion of information and learning, profits and creativity that enhance the human qualities of its beneficiaries as it enriches them. Workers’ learning increasingly compensates for their labor, which imparts knowledge as it extracts work. Joining knowledge and power, capitalism focuses on the entropy of human minds and the benefits of freedom. Thus it is the most humane of all economic systems. [Emphasis mine]